A SkyWest (Delta Connection) Embraer is on the climb from 16R and tucking the wheels in the wells in this sunrise-hour shot.

Gary SchenauerPhoto Uploader2달 전
As is obvious by the shadow of the wing on the fuselage, the early morning sun is still low in the east. It had just popped up over the Virginia Range Mountains east of the airport when this click was snapped.
Report

Tom Vance한달 전
Brrrrrrrrr...my fingers would have been frozen w/out gloves,,,,,( teeth chatter ) just looking at this.
Report

CHRIS ROBEY한달 전
This is a great early morning shot Gary! Just by chance, yesterday I came across a copy of a safety document that my airline used to distribute to their pilots back in the '80s. It's dated July 1988. On opening it up, the first article is about a Galaxy Airlines L188 Electra that crashed a couple of minutes after takeoff at KRNO in early '85. He was enroute to MSP, more than 3 hours to the east. One passenger was the only survivor.
Report

Gary SchenauerPhoto Uploader한달 전
Diana ... Thank you very much. (Wave)
Alien ... Yeah, it WAS really "brisk" when I was out there next to Charlie TWay. It was 22 degrees F and a steady breeze. It was so cold I was having difficulty getting my fingers to press the shutter button. I had two hand warmers but I had been out there from well before dawn (when I first arrived it was pitch dark and only 18 degrees) and both warmers were cooling down so they weren't much help anymore. But I survived. And I guess it wasn't THAT terrible because I'm going out again on Friday early AM.
Hey, Chris, howdy. (Wave) Yep, that Electra went down right on S. Virginia Street. In fact, I was just at the accident location two days ago - today there is a small store mall near the place on the street that it went down. A couple years ago, some jerkwad stole the bronze memorial marker that had been placed in memory of those who died. So a Reno city councilwoman, a Ms. Kitty Jung, spearheaded the process of replacing it. I was asked to be at the ceremony when the new memorial was uncovered to take photos. The lone survivor, who had been a young boy who had been found right in the center of S. Virginia Street still strapped into a seat, attended the rededication ceremony (naturally, he is now an adult). It was quite a nice ceremony, but a bit emotional -- the Galaxy flight was a charter that had brought a group out to San Francisco for a Super Bowl game and the young boy had been with his dad. After he recalled the crash, he unveiled the new marker. I was taking pics and when he unveiled it, I immediately noticed that the Flight Number was incorrect. I kept taking photos and certainly did not interrupt the ceremony, but later I spoke privately with the councilwoman and pointed out the error. She wasn't certain whether I was correct, but she said she would look into it immediately. And she did. She called me at my home a short while later to thank me and assure me that the flight number error would be fixed pronto. I went back a week or so later and the number had been corrected. It is fairly easy to see that the number has been replaced, but it does not detract from the memorial's appearance. And , I have photos of the memorial with the incorrect number and also the corrected number. BTW, the crash should never have happened. There was nothing at all wrong with the Electra. A ground agent at an FBO at the airport failed to secure the small door after he ground started the engines. When the plane took off, the door popped open and was banging against the fuselage. The pilot, not knowing what it was he was hearing, declared; then requested an emergency return to the airport. The Electra crashed as he was turning back. I have photos of the scene (not mine - I wasn't here). there wasn't much left. But the boy was found strapped in to an upright seat all by himself in the middle of the four lane street. What a tragic occurrence.
Report 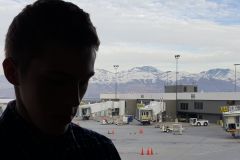 masonite한달 전
Amazing picture and story, Gary. I learn so much from your comments.
Report

CHRIS ROBEY한달 전
Thanks Gary for that background on the tragic accident to the L188. The report that I read stated that he taxiied out on engines 1 and 4, starting 2 and 3 on the way to the runway. It must have been a short taxi out because they were rolling onto the runway and setting up takeoff power just 2 minutes and 10 seconds after starting the first engine at their parking position on the ramp. The air start access door that had not been secured measured just 8 inches by 11 inches, but that was big enough to create so much buffeting and vibration once the Electra was airborne at 120 knots that the Captain thought he had an engine or propeller problem...
Report

ken kemper한달 전
One of the better Embraer 175 photos I have seen.

What a story about the RNO L188 Crash. Beautiful plane / and a sad tragedy.
Report

Tom Vance28일 전
Gman too funnee...and age makes a difference Isotoner Gloves, and cut just an opening for your fingertips to touch the camera might help...
Report