4달 전 제출됨
Federal officials say that Southwest Airlines and the union representing its pilots have resisted cooperating with investigations into accidents and other incidents and pushed to close the matters quickly. (www.cnbc.com) 기타...

Jim Albies 3달 전 3
We still go piss on a couple of scabs graves,not to proud of it but that’s what scabs deserve .
응답 ↓•퍼머링크•Report

sparkie624 3달 전 1
Maybe someone will return the favor for you when you pass!
응답 ↓•퍼머링크•모•Report

sparkie624 4달 전 9
One thing I can say about working in the Airline Industry for 40+ years now, When I was in a union it felt like there was always an Us against them constantly... Once I went to where there was no union, I have always gotten along with the Bosses and work together with them... I ultimately made more money (especially after Union Dues) and enjoy work much better in a Non-Union Environment. I cannot speak for others, but that is the way it is for me... One take away from Unions is they support the Slackers an lazy people to where the rest of us ended up having to cover for them... Now, we all work together and happily in my last job and my current job! Best move I ever made and don't have to do more than my fair share due to a slack off worker. I will get flamed and down voted for this, but it is simply the facts.
응답 ↓•퍼머링크•Report

Highflyer1950 4달 전 4
No blowtorch here for you. Our association had a really great pilot negotiator and we all benefited……right up until the company made him VP of Flight Ops. Now he never forgot his roots but it was different type of negotiation tactic from then on. I personally like a company with an employee share plan where the company matches the employee. You tend to look at the whole employment/ compensation picture a little differently when you own a piece of it.
응답 ↓•퍼머링크•모•Report

darjr26 4달 전 7
Southwest has lived a charmed life. When they have an incident their PR department does a great job sugar coating whatever happened. Their behind the scenes dealing with the FAA and Boeing really need to come to the surface. Their downwind takeoffs and landings are well known to those of us lined up to takeoff and land into the wind. And of course, they are they only airline that thinks a 737-200 and a 737-800Max are the same airplane.
응답 ↓•퍼머링크•Report

Silent Bob 4달 전 1
The 200 vs Max same airplane comment was funny, and unfortunately not far from the truth.

But I do have to take issue with the "downwind takeoff" accusation. SWA like most airlines I know is approved for takeoff with up to 10 knots of tailwind component. If you are trying to infer that they take off with more than that I would humbly suggest you provide some sort of proof.
응답 ↓•퍼머링크•모•Report

godutch 4달 전 5
Some businesses are sometimes corrupt, while ALL unions are ALWAYS corrupt. Their whole business model is protection of the lazy, lawbreaking, incompetent members.
응답 ↓•퍼머링크•Report

Steve Oravets 4달 전 4
I have a degree in Labor. What do you want know. Your ignorance is exceeded only by your vulgarity mr godutch.
응답 ↓•퍼머링크•모•Report

sparkie624 4달 전 0
Language please.... There are some young eyes that peer in here, and others that just don't want to see it.. Thanks in advance.
응답 ↓•퍼머링크•모•Report

godutch 4달 전 -1
Absolutely, I was a mid-level manager ya goof! What about it union dude?
응답 ↓•퍼머링크•모•Report

Steve Oravets 4달 전 1
The Scab by Jack London.
"In a competitive society, where men struggle with one another for food and shelter, what is more natural than that generosity, when it diminishes the food and shelter of men other than he who is generous, should be held an accursed thing? Wise old saws to the contrary, he who takes from a man's purse takes from his existence. To strike at a man's food and shelter is to strike at his life, and in a society organized on a tooth-and-nail basis, such an act, performed though it may be under the guise of generosity, is none the less menacing and terrible."
응답 ↓•퍼머링크•모•Report

godutch 4달 전 -5
Look up and read with understanding this time. I STATED that! Dumb question.
응답 ↓•퍼머링크•모•Report

sparkie624 3달 전 1
Most of those ratings are from people who do not have a clue of how things are supposed to work.. I would put that rating service as a 1 on a scale from 1 to 100! I worked for them, and it is proven they have had lots of FAA Issues and questionable work on their planes.
응답 ↓•퍼머링크•모•Report

Silent Bob 3달 전 1
Please show me on the doll where Southwest hurt you.
응답 ↓•퍼머링크•모•Report

Matthew Capece 4달 전 -7
My father was a union member. He was a highly skilled carpenter and worked hard. We had health care and he retired in dignity. The union expected members to do their jobs and employers to pay workers a living wage and on time and treat workers fairly.
You on the other hand are a biggot.
응답 ↓•퍼머링크•Report

godutch 4달 전 8
LOL, lib alert. When libs lower themselves to use bigot and racist, it means they have nothing but name-calling left. Matthew, BTW, you spelled it wrong, it's 'bigot'.

I call BS on your comment: "The union expected members to do their jobs." Very seldom do the Unions agree with employee discipline...and do their best to protect even the worst employees...and often work to get their jobs back when fired. The unions back office and leadership are out for themselves and their high salaries and perks. They provide virtually NOTHING to the employees except during a strike, a paltry amount to help when firebombing scabs and management houses and cars. It's the company who provides EVERYTHING to the employee - their wages, the benefits, and their retirements (funded by the company, but usually run into the ground by the unions). Union bosses take, and take, and spend, and spend, and give little back...often spending union membership dues on THEIR politicians. Unions are corrupt to the core.
응답 ↓•퍼머링크•모•Report

Matthew Capece 4달 전 2
Thanks for the spelling correction. Guess you never heard of bad employers that don't pay their workers, or who cheat on their taxes or workers' compensation premiums or who fleece consumers or who engage in labor trafficking and racketeering. I call BS on you and your fellow bigots on this stream. While indeed there are bad employers and unions that do wrong, most play by the rules and do the right thing.
응답 ↓•퍼머링크•모•Report 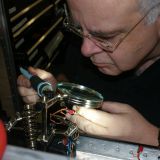 Lawrence Shaw 4달 전 -1
Please enlighten us about how you know these details of the workings of all unions. After all there are hundreds if not thousands of them.

Also, as members can vote to decertify their local, or simply leave the union individually, If they are the horrific dens of criminality you say why do so very few leave?

Or might you be full of blue liquid?
응답 ↓•퍼머링크•모•Report

Lewis Tripp 4달 전 8
Unions at one time were the only way for workers to be protected, now they are mafia-infected thugs that should be terminated.
응답 ↓•퍼머링크•모•Report

sparkie624 4달 전 1
Yes that is true... that is before we got a lot of rights and the government stepped in. No need for Unions any longer...
응답 ↓•퍼머링크•모•Report

Michael Hallock 4달 전 1
Plus, in watching a program about the 737MAX, didn't Boeing cut an under-the-table deal with Southwest where they would pay the airline $1 million a plane if extra training was required? I may be incorrect on the reason, but i do remember the figure of $1 million per plane
응답 ↓•퍼머링크•Report

Highflyer1950 4달 전 3
I’ve not heard that but since Southwest only operates 737’s, I’ll bet all their pilots would have been intimately familiar with those two switches, standard on all models since inception that disconnect the autopilot and all electric trim motor operations. Something a couple of foreign crews were not.
응답 ↓•퍼머링크•모•Report

sparkie624 4달 전 1
I heard something about that a long time ago... Having worked there, I did hear about Boeing doing training for them... I don't think was under the table however.
응답 ↓•퍼머링크•모•Report

After God had finished the rattlesnake, the toad, and the vampire, He had some awful substance left with which He made a scab. A scab is a two-legged animal with a corkscrew soul, a waterlogged brain, and a combination backbone made of jelly and glue. Where others have hearts, he carries a tumor of rotten principles.

When a scab comes down the street, men turn their backs and angels weep in heaven, and the devil shuts the gates of hell to keep him out. No man has a right to scab as long as there is a pool of water deep enough to drown his body in, or a rope long enough to hang his carcass with. Judas Iscariot was a gentleman compared with a scab. For betraying his Master, he had character enough to hang himself. A scab hasn't.

Esau sold his birthright for a mess of pottage. Judas Iscariot sold his savior for thirty pieces of silver. Benedict Arnold sold his country for a promise of a commission in the British Army. The modern strikebreaker sells his birthright, his country, his wife, his children, and his fellow men for an unfulfilled promise from his employer, trust, or corporation

sparkie624 4달 전 0
Luck works in mysterious ways... As said many time.. Luck Favors the Foolish! I decided to leave when I was told to clean dripping Oil out from under an engine before the crew arrived because they knew that the engine was out of tolerance and needed a new engine... That was my decision point to leave the company... Not to mention at the time drinking alcohol while still on the clock... How else can you call it anything but sloppy. Their safety Record is Dumb Luck... I could still work for them today, but I am not willing to lower my standards!
응답 ↓•퍼머링크•모•Report

You clearly were fired at SWA and can't get over it!
응답 ↓•퍼머링크•모•Report