1년 전 제출됨
Singapore Airlines will start a new route between Singapore and New York that will take the title of the world's longest flight when it launches in November. (www.businessinsider.com) 기타...

Lynn Goss 1년 전 9
Business class would be tolerable, but to wear a mask for that long ... No thanks.
응답 ↓•퍼머링크•Report

mikey mikey 1년 전 2
you could always stop for a layover (ANC comes to mind), but you'll have to wear a mask in the terminal, so what's the point of that?
응답 ↓•퍼머링크•모•Report

John Palmer 1년 전 1
Where is Tiger Airlines now that we need it!
응답 ↓•퍼머링크•모•Report

Michael Hawke 1년 전 4
Flew the Newark to Singapore route in 2010 I think when it was all business class. Right after the 09 market crash. I think there were more flight attendants then passengers on that flight. Long time on a plane but better then having to stop partway and change planes. Incidentally we had two go around sin Singapore due to weather. Makes you start to wonder how much due can this thing carry. I think it ended at around 19.5 hrs when we finally landed.
응답 ↓•퍼머링크•Report

Andy Cruickshank 1년 전 4
If I recall correctly the original flights were in a modifies A340 and there was little advantage to the SIN passengers but because of timing there was a significant advantage to connecting passengers who were able to reach their final destinations 12+ hours sooner (some of the connecting flights to AKL,SYD and MEL were still another 8 hours. Painful at best!
응답 ↓•퍼머링크•Report

I took that flight about dozen times RT from EWR. Flying from the East Coast of the USA, it was MUCH better than connecting through ORD and NRT (e.g., via United).

Sometimes we would depart EWR on 4L, turn 40 deg left, and go straight all the way to SIN!

It was very comfortable, even in "Executive Economy" (where I was). The configuraiton was approx 50/50 Business/Coach, but even coach a spacious 2-3-2 arrangement, with only about 180 seats on the entire aircraft. They could not pack people in because of the the weight requirements. (I once returned home on Chinese New Year, and there were seven total pax on board.) I got a lot of work done on those flights.

The food was good, and they also had a little buffet in the back where you could grab a snack anytime.

People would always ask, "How could you stand being on the same plane for 20 hours?!" Well, it was 10x better than being crammed into coach in a 747 for 14 hours, and then sitting (or trying to) in crowded NRT for four hours, followed by another 6+ hours in another overcrowded 747 to SIN.

Towards the end, they converted these flights to 100% business, but they didn't last through the 2008 financial crisis.
응답 ↓•퍼머링크•모•Report

THOMAS MCGUINNESS 1년 전 2
I've been doing transpac flights to Singapore since 1980. Back then a stop in either Honolulu or Anchorage was mandatory. The way I look at it is the first 8 hrs is the hardest, but after 8 hrs my brain thinks of the plane as my new "home" and I can continue almost indefinitely.
응답 ↓•퍼머링크•모•Report

David Stocker 1년 전 1
Agreed! Exactly the same for me after travelling trans-Pacific and Atlanic ~4x/year for about the same number of years. And for me, I have no memory of each trip within 24 hours of making it -- unless we had to egress using the escape slides, or something similar to that! :-)
응답 ↓•퍼머링크•모•Report

David Stocker 1년 전 3
When I was regularly making the EWR-SIN RT circa 2005, we would typically take the polar route to SIN (due north from EWR), but sometimes we flew over northern Europe. In one extreme case, we flew directly over Rome! The Captain told me it was all about the foreact weather and winds aloft when they planned the flight -- whatever route provided the shortest time aloft. The return SIN-EWR was typically polar, or over AK.
응답 ↓•퍼머링크•모•Report

THOMAS MCGUINNESS 1년 전 3
It did when my sis flew EWR-SIN in February. Caught the jetstream and arrived 1:45hrs ahead of schedule.
응답 ↓•퍼머링크•모•Report

Samuel Bixler 1년 전 1
According to the Great Circle Mapper (http://www.gcmap.com/), the most direct route would be nearly straight north from JFK, brushing the northwest tip of Greenland, and over Russia and China.
응답 ↓•퍼머링크•모•Report

paul gilpin 1년 전 0
from the article:
The Singapore-New York route was formerly served with an Airbus A380 aircraft, the airline's former flagship, that made a stop in Frankfurt, Germany in both directions.

it helps to read the article, butt why do that when others will.
응답 ↓•퍼머링크•모•Report

Jim Nasby 1년 전 2
Just because eastbound made the most sense when they had to stop for fuel doesn’t mean it’s the best way to go nonstop...
응답 ↓•퍼머링크•모•Report

paul gilpin 1년 전 2
given the 14 day isolation, would a cruise ship be more better like?
응답 ↓•퍼머링크•Report 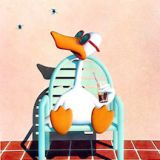 CB HARDY 1년 전 0
If you grew up in a Third World country, and were relocating to Anywhere, U.S.A, that back row seat would be a magic carpet ride.
응답 ↓•퍼머링크•Report

Is the scarebus really that slow that it will take 19 hours. Go much faster on a Boeing and get there an hour sooner.
응답 ↓•퍼머링크•Report