1년 전 제출됨
Dubai's Emirates has told employees to take a free coronavirus vaccine or pay for tests to prove they are not infected with the deadly disease, cautioning that an unvaccinated workforce could create operational issues. In an internal email, seen by Reuters, the airline told cabin crew that starting March 15, those not vaccinated must pay for a test valid for seven days to the start of flight or standby duty. "Certain countries may in the future differentiate entry criteria between… (www.yahoo.com) 기타...

Mark Castleman 1년 전 3
My employer (I'm a teacher) has made it plain that they will not require vaccination but come fall if I am required to quarantine I will have to use my annual leave days (I only get 8) and once those are gone quarantine will be unpaid leave. Being vaccinated (which I am) means no more quarantine merry-go-round.
응답 ↓•퍼머링크•Report 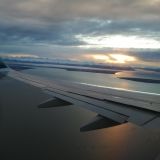 Shara Di Valerio 1년 전 2
Why do you think it’s ethical? The vaccine only helps the person receiving it by mitigating the symptoms of covid 19. It does not prevent anyone from carrying the novel corona virus. It just doesn’t make sense. And yes - this info is on the CDC website. And no. I’m not an anti vaxer. Just blown away by the fear our leaders, media, pharma has instilled in people. And the spin related to the vaccine.
응답 ↓•퍼머링크•모•Report

John Prukop 1년 전 0
It's NOT a "vaccine" at all. It's a DARPA/Moderna nanoparticle operating system with Lucerfrase, Hydrogel and Transfection properties. Ya all better spool-up. Dr. Carrie Madej explains the whole rotten apple on BitChute. Do your own research and wake-up.
응답 ↓•퍼머링크•모•Report

Alister Grigg 1년 전 2
I'd choose an airline with a fully vaccinated crew any day of the week.
응답 ↓•퍼머링크•Report

hhwff 1년 전 3
And I would choose an airline that recognizes the insanity of subjecting their healthy employees with this experimental concoction to supposedly protect against a virus that has a greater than 99.7% survivability. Such an airline would also recognize that the potential neurological problems resulting from these 'vaccines' (dementia, parkinson's, alzheimer's etc that have been warned about by more than a few researchers in these fields) could cause havoc if a substantial number of employees do not make it to normal retirement age due to medical issues.
응답 ↓•퍼머링크•모•Report

Nathan Cox 1년 전 1
This is wrong for so many reasons. I ask that ANYONE who thinks they want to get the experimental vaccine to find out what EVERY ingredient is before going all in. Just google them. It’s not ot hard to do and you’ll educate yourself on just what in these vaccines. Remember that this has a 99.9X survivability rate with no treatment. We are being boxed into a corner from all angles and unless we fight back against this medical tyranny, we will be walking bio guineapigs, with genetically modified DNA. I’m pretty certain I’ll be better off telling them to stick it instead.
응답 ↓•퍼머링크•Report

Chris Risley 1년 전 -4
Take a vaccine from the people who gave us the virus? Right. I'll be doing that at the speed of light.
George Orwell couldn't dream this insanity up.
응답 ↓•퍼머링크•Report

Rex Bentley 1년 전 -1
Those that surrender liberty for security deserve neither. What part of the communist world you from??
응답 ↓•퍼머링크•Report

Craig Good 1년 전 -5
How about all employers everywhere tell people to get vaccinated or just look for new employment? Anybody without a valid medical exemption should be vaccinated. Period.
응답 ↓•퍼머링크•Report

John Prukop 1년 전 1
I see you've been drinking VAST amounts of Fraudster Fauci's CoVaids Cool-Aid! Boy, are you in for a surprise!
응답 ↓•퍼머링크•모•Report

Steven Bell 1년 전 -5
Yeah for a virus that has a 99.82% survival rate. If the vaccine works so well why does your Dr. Falsey say to still wear a mask after vaccination?
By the way kiss my ass!
응답 ↓•퍼머링크•모•Report

Matthew Viscito 1년 전 3
First of all, this 99.82% survivability number is completely made up. Divide number of deaths by number of cases and get mortality rate. It is well over 1% - that may not sound like much, but when you have a population of 300 million, if you do not curb spread with immunity, eventually everyone will get it and that adds up to 3 million deaths - if you think that is insignificant, well may God have mercy on your soul. Further, beyond mortality is the significant morbidity that comes with post infection complications for numerous (greater than 10%) of those infected.
응답 ↓•퍼머링크•모•Report

Stanley Potts 1년 전 1
No need to get vulgar. That just highlights your ignorance!
응답 ↓•퍼머링크•모•Report

tomasz dabrowski 1년 전 -3
Ummm because you can have the antibodies that dont make you sick BUT you can still spread the virus? Tell me is ignorance really bliss?
By the way kiss your azz
응답 ↓•퍼머링크•모•Report

hhwff 1년 전 1
that 'antibodies that dont make you sick BUT you can still spread the virus' meme has been debunked ages ago.
The WHO, CDC, Fauci, Gates and Biden have flip-flopped on so many topics that one can only assume they are cult leaders (who specialize in these kinds of saying one thing in the morning and the opposite before the day is done ).... all to mess with your mind.
응답 ↓•퍼머링크•모•Report

tomasz dabrowski 1년 전 -1
you are confused with what you see and hear form FOX, Newsmax and all the far right blobs. It was the former guy who would eat his 2 Big Macs in the morning, 4 at lunchtime and 6 on the evening. before dinner timer, amd 4 for a late night steak.

Spencer Hoefer 1년 전 2
Since when is this a political issue?
응답 ↓•퍼머링크•모•Report

tomasz dabrowski 1년 전 -2
i think i see the problem now. you are taking your science advice from memes
응답 ↓•퍼머링크•모•Report

hhwff 1년 전 4
.... and I have found that those who have been convinced by all the hype that this as yet not isolated virus (CDC's own admission)is a serious health threat they double down on their convictions no matter how much evidence is available to the contrary.
응답 ↓•퍼머링크•모•Report

John Prukop 1년 전 0
Wrong. Have you read the Morell/kawufman/Cowan "SOVI" - Statement On Virus Isolation and the associated 4-page PDF white paper? I didn't think so. Here ya go:

"Finally, if pathogenic viruses don’t exist, then what is going into those injectable devices erroneously called “vaccines,” and what is their purpose? This scientific question is the most urgent and relevant one of our time.

We are correct. The SARS-CoV2 virus does not exist.

You're all being played by Fauci, Birx and the Global Elitists who meet at Davos every year to map out their next plan for YOU. If you doubt that, go back and search out EVENT 201 and listen to Klaus Schwab of the World Economic Forum - a Non-Governmental Organization (NGO) and Billy Gates the Eugenicist. Global Depopulation is the plan under the Communist United Nations Agenda 21 and Agenda 2030. SAY IT ISN'T SO!
응답 ↓•퍼머링크•모•Report

No doubt there are global elitists doing what they can do enrich themselves while enslaving the poor, but to say the virus does not exist is a fantasy.
You think all the governments on the planet are in on it? Even the poor ones?

The planet IS over populated but if you think about it logically, why would the elitists want less slave labor? Does not compute.

Also you would think that if there was a big conspiracy agenda 21 and 2030 would NEVER be published if they had ulterior motives.

I believe in ghosts (saw several at different times) i believe in UFO's (saw one of them) i believe the US govt killed JFK. But the idea that EVERY Government in the world has a secret agenda to depopulate the planet by creating a fake virus to inoculate everyone is really far out there.

The only concern i might have with the vaccine is how quickly it was made. I saw I Am Legend.

But other than that the more realistic conspiracy is that the pharmaceutical companies created COVID 19 just to increase their profits.

Either way its real, its here, and people may choose to get vaccinated or not.

So Say We All
응답 ↓•퍼머링크•모•Report