American Airlines' reign as the world's largest airline may be ending

2년 전 제출됨
American's five-year reign as the world's largest airline may be coming to an end. By two major measures, Fort Worth-based American Airlines fell behind either Delta Air Lines or United Airlines in the rankings of the world's biggest air carriers during the second quarter. (www.dallasnews.com) 기타...

Bill Y 2년 전 2
I'm an American stock holder because I want to go to the board meeting a complain. I no longer fly American because of the poor customer service, canceling flights because it is raining at the destination 3.5 hours away and POOR maintenance (seems 90 percent of flights that I was on was delayed because of pilots not showing up or maintenance issues). I was on the flight from RNO to DAL when we smelled smoke and had to make an emergency landing. American was a great airline before the merger but now I don't think the employees care...
응답 ↓•퍼머링크•모•Report

Don't you have spell checker on your device?
응답 ↓•퍼머링크•모•Report

STEPHEN HLUCHANYK 2년 전 -1
This is what you have to worry about? Sorry to hurt your sensibilities. Driving and typing.
응답 ↓•퍼머링크•모•Report

Dale Ballok 1년 전 0
Ya, EVERYONE has to worry about YOU typing while driving!!!!
Apparently, typing on your phone is more important than THE SAFETY OF OTHER MOTORISTS!!!
응답 ↓•퍼머링크•모•Report 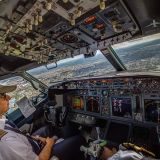 terry gersdorf 2년 전 6
Ever since US Airways acquired AA its been slowly going down hill... Time for Doug to go
응답 ↓•퍼머링크•Report

Bryan Morgan 2년 전 4
As a retired US Air pilot I will have to agree with most of the comments. Bob Crandall and Parker never gave a rap about their employees. It was always bottom line. WhenI started with Piedmont Airlines it was not like that. We took pride in being Piedmont pilots. They would never have stolen our retirement and put at the back of the line. Like Gordon Greco said Greed is good and they are very good at it.
응답 ↓•퍼머링크•Report

Benito Cámela 2년 전 9
The largest and the best ever was Pan Am.
응답 ↓•퍼머링크•Report

siriusloon 2년 전 6
How did that work out for them?
응답 ↓•퍼머링크•모•Report

ROBERT MILLS JR 2년 전 1
Yes, MOHAWK!
At Las Vegas (LAS) McCarren, there are several excellent displays in the terminals of some of the airlines that are no longer in existence.
MOHAWK has a display and it is most interesting.
응답 ↓•퍼머링크•모•Report

ROBERT MILLS JR 2년 전 -1
Roger that Benito!
Flew Pan American World Airways First Class around the world back in late 1984 - early 1985.
Took a break in Singapore with a friend I gained flying from Narita (Nerdville) to Singapore for 10 days while staying at the Singapore Intercontinental Hotel.
I still have several items of Pan Am memorabilia.
Being a total freak for airplanes, especially the 747, I of course visited the flight decks to chat.
Because I had my pilot license, some of the captains allowed me (unofficially) upon brake release to stay for the take-off departure after the official notice they had to close the flight deck door (they never did).
Before the inside job of 09.11.2001, I'd had the opportunity to also visit, in flight, the flight decks on Brittish Airways and KLM.
Never forget the swishing noise on the flight deck of the exterior air we were penetrating at 620 mph.
Rates as one of the top five greatest experiences of my life so far.
WILL ALWAYS LOVE PAN AMERICAN WORLD AIRWAYS.
Those WERE the DAYS.
응답 ↓•퍼머링크•모•Report

mary susan watkins 2년 전 5
being the "largest", does not make an airline necessarily the best..i remember the "good old days", when ammerican WAS"something special in the air",and "w're american airlines,doing what we do best"..since the merger with us airways,not so much!!being the largest is measured by many factors from route structures to fleet size,to employees to monetary gain and shareholders..if american must cut back on routes,cities served,employees and aircraft due to the 737 issue,of course they will lose strength and size...
응답 ↓•퍼머링크•Report

James Wilson Jr 2년 전 1
Bob Crandall made AA the largest in the 1980s at the time when other airlines were struggling with "Deregulation" of US airlines.He pushed forward many innovations in the airline industry.Since he retired it has been all down hill for American. My friends there tells me that after the merger with US Airways it is American Airlines IN NAME ONLY.
응답 ↓•퍼머링크•모•Report

STEPHEN HLUCHANYK 2년 전 2
You understood it didn't you. Lower your nose, you may walk into something.
응답 ↓•퍼머링크•모•Report

n9341c 2년 전 1
Right, because American was bankrupt when US Air bought them. I mean merged with them. You dont keep the senior leadership team intact of the bankrupt airline.
응답 ↓•퍼머링크•모•Report

James Wilson Jr 2년 전 2
You are wrong.Actually American Airlines had about three and a half billion dollars in their coffers even when they declared BANKRUPT as their strategy against any monster pay rise for their employees. US Airways did not have a tenth of that worth in cash at the time of the merger. The CEO of AA SOLD OUT AA.
응답 ↓•퍼머링크•모•Report

James Wilson Jr 1년 전 1
Size does matter in the airline business. When an airplane fails any test on the ramp or at the hanger and 300 people are waiting to board for their trip you want an airline that has multiple aircraft as backup.Check the you tube about the airline passengers missing their flights because of maintenance or a delay of a flight because of NO SPARES for their flight.
응답 ↓•퍼머링크•모•Report

Thomas Caruthers 2년 전 1
File this article under "Who Cares?" Size is not the matrix that matters to the consumer or Wall Street.
응답 ↓•퍼머링크•Report

AWAAlum 2년 전 2
I wonder if it doesn't come into play when selecting which airline...personally I'd definitely choose a well known company over one I'd not heard of.
응답 ↓•퍼머링크•모•Report

strickerje 2년 전 1
For an airline, I’d say seat miles makes the most sense. Fleet size or number of flights would artificially inflate the size of the regionals, and market cap is often based on nothing more than speculation (just look at most of the tech industry).
응답 ↓•퍼머링크•모•Report

Anton1 2년 전 0
What a crap article, AA still has the most planes according to the table in the article so that's what still makes them the largest!
응답 ↓•퍼머링크•Report

strickerje 2년 전 2
There are several ways to measure an airline’s size, but I’d say seat miles makes the most sense. Fleet size or number of flights would artificially inflate the size of the regionals compared to the majors.
응답 ↓•퍼머링크•모•Report

Kevin Clerkin 2년 전 0
Aeroflot in Russia, every thing is government owned. I think they even count the "Flies".
응답 ↓•퍼머링크•Report